THE CONSTRAINT
Institutions may not show (or indeed not have) real commitment for a Living Lab approach.
Sometimes barriers might be due to the lack of open-mindedness and receptiveness by institutions involved in Living Lab activities. Local governments, as well as other actors involved in the process,
including Non Governmental Organisations (NGOs), universities and companies, might in fact be unfamiliar with, or open to, co-creation approaches, believing that interaction with other stakeholders adds unneeded complexity to policy development.
Low receptive institutional contexts tend to favor expert-driven ways of thinking and agreement with powerful lobbies, in traditional Decide-Announce-Defend (DAD) approaches.
In such contexts, even if Living Labs are activated and developed, they might lack full support of key institutions, who might support them as a façade tactic, indeed being unwilling to implement their outcomes. 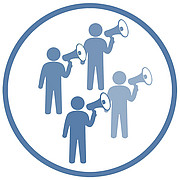 WAYS TO ANTICIPATE
→ Seek for early inclusion of policy-makers and local institutions
→ Provided that Living Lab organizers show genuine commitment and give voice, role and responsibility to diverse groups of citizens, civil society organizations and experts, institutions might start appreciating the approach and its benefit
→ Carry out multiple successful pilot processes
→ Build on existing practices and procedures of representative democracy to promote dialogue between stakeholders

To cope with such constraints on the process institutional context, early inclusion of policy-makers and local institutions should be sought for. Provided that activities in the Living Lab are adequately designed, namely that Living Lab organizers show genuine commitment and give voice, role and responsibility to diverse groups of citizens, civil society organizations and experts, policy-makers and institutions might start appreciating the approach and its benefits.
Then, it would be a matter of repetition. Once multiple successful pilot processes are carried out, institutions and policy-makers would embrace approaches and processes, supporting their outcome.
If instead policy-makers and institutions do not accept invitations to engage in Living Lab practices, try to bring Living Lab outcomes into traditional channels of democratic representation, fostering a public discussion with and within elected political representatives.

Bellinzona
The City of Bellinzona was formally owning the Living Lab process; however, due to the lack of familiarity with participatory approaches, they were not fully aware of the potential of participatory Living Lab projects in supporting policy development. Therefore, they lacked leadership and predominantly relied on advice and superintendence by the local university. They mainly perceived the Living Lab as a technology innovation testing ground: a single, small-scale, closed and controlled process, aimed at developing and evaluating the mobile app prior to its rollout at city-level.
In particular, local decision-makers tended to cling to authoritative governance styles, rather than opening up to more consultative, cooperative or even facilitative approaches, mainly due to the fear of losing formal power and responsibility on the decision. Their main concern was to avoid possible financial and personal drawbacks and, inadvertently or not, the tendency was to keep the Living Lab in the policy periphery. However, leadership can only be learnt through experience: providing first-hand opportunities of experiencing public participation processes is a first start. Thus, researchers involved in Living Lab organization tried to promote a new political culture by ensuring the presence and active participation of representatives of the Municipality (civil servants, politicians) in Living Lab meetings. This helped getting local authorities and decision-makers gradually acquainted with the concept that Living Labs may represent a valuable learning-by-doing tool and a constructive and
enriching means for reflection on practices or policy.
Also, to favor Living Lab acceptance by decision-makers, the strategy was to focus at first on an app development: practical and technologically oriented, this was perceived as a low-conflict topic and therefore easily supported. Later on, capitalizing on the actor- and context-dependent knowledge created while Living Lab participants were testing the app and concretely experiencing new mobility behaviors, discussion in the Living Lab was upscaled to policy-related topics regarding future mobility scenarios (“What would we need to make mobility more sustainable in Bellinzona?”). This way, also potentially scaring and far-reaching discussions were spontaneously introduced in the Living Lab with the support of the institutions.

Maastricht
In Maastricht, although found cumbersome, there is already experience and (at least among part of the civil servants) appreciation for more Living Lab-type of approaches. The tool of visioning and participatory visioning is also applied in Maastricht, although not very often. One constraint for further use is that not the municipality, but stakeholders like the national railways and local businesses, prefer to exclude citizen groups (see constraint #8 “Stakeholders and institutions are highly fragmented”).
A further constraint on upscaling of Living Lab approaches was anticipated by refining specific details in the experiment in Maastricht, most notably:
• separate stakeholder groups to first work with people with similar perspective, before a larger discussion with a mix of stakeholders, helping to better structure the arguments;
• build further on output of the first session in the second one, whilst receiving reflections;
• include the municipality as one of the participants since the very beginning.
These characteristics were indeed new and appreciated by civil servants, because they helped them to participate in an equal, more fruitful way. Normally, when the municipality facilitates participatory sessions, they either tend to be under pressure and criticism due to policies in the past (raising frustration at the side of citizens and others), or they risk (at least the impression of) “reproducing existing power structures” (see constraint #4). Therefore, civil servants are now open for wider application in other policy fields.

Brussels
During the first year of the Brussels Living Lab, different attempts were made by Cosmopolis and BRAL (respectively, the local university and a city movement) to engage with regional governmental institutions responsible for mobility, environment and smart city. These included various meetings with staff of the cabinet’s and of the administration, and official letters with different proposals for cooperation and joint activities within the Living Lab. The institutions did not answer to any of the proposals, for reasons that, at this point, we could only speculate on. On this basis, it was decided to approach institutions through a different channel: via the political production of the Brussels movement for cleaner air. Rather than approaching directly the regional institutions, BRAL and Cosmopolis contributed to facilitate a dialogue between citizen groups and political parties in the context of the local and regional elections, thereby scaling up the Living Lab via the consolidated practices of democratic representation. This was done, for instance, through, a process of citizen lobby in view of the regional election (series of facilitated dialogues between citizens groups and parties’ representatives), and of a large event on the topic of citizen, science, and air pollution.